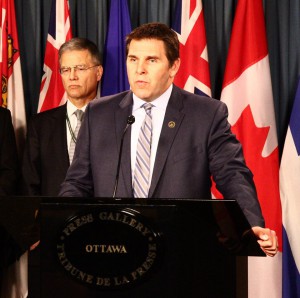 Montreal, April 4, 2017 – The Quebec Mounted Police Members’ Association (QMPMA) has officially filed a request to allow its 800 RCMP members in Quebec to unionize — a first in Canadian law enforcement history. The association deposited its request today with the Public Service Labour Relations and Employment Board.

“This is a historic moment for the men and women that we represent,” said QMPMA president Serge Bilodeau. “This decisive step towards recognizing our rights to unionize and to freely negotiate our working conditions is the fruit of more than 30 years of sustained militancy and hard work. We are very proud to now concentrate our efforts towards making our association the official negotiator for the RCMP members who work throughout Quebec.”

Bilodeau believes that by having a recognized association with a legitimate collective bargaining process, “Quebec’s frontline RCMP members will finally have a say when it comes to such issues as harassment, staffing needs, equipment and disciplinary measures.  This is a right that other police departments and respective unions across Canada enjoy, and one that RCMP members are trying to obtain. They’re not asking for anything more or less than what is already offered to other police officers across the country.”

While the request to unionize RCMP officers is being made solely on behalf of Quebec’s members, the move is justifiable due to the specifics that are applicable to the particular needs of Quebec’s frontline members, said Bilodeau, adding that he would have preferred that “my colleagues from the two other RCMP member associations had joined us in filing a single request for accreditation. Unfortunately, our efforts at joining our union goals across the country were in vain. Our door, meanwhile, remains open to discussions if our colleagues from the other associations wish to talk with us.”

It was back in 1986 that a first request to unionize RCMP members was turned down by Ottawa due to exclusions found in the Canada Labour Code. The QMPMA challenged the decision at Quebec Court, before bringing the cause to the Court of Appeal and, finally, in 1999 before the Supreme Court of Canada. However, five of the seven judges voted against the union bid by RCMP members — a bid led by QMPMA founder and then-president Gaétan Delisle.

A landmark decision by the Supreme Court of Canada on January 16, 2015 finally granted RCMP members the right to form a union and obtain collective bargaining rights. The Court based its decision on the Canadian Charter of Rights and Freedoms. Until that day, the RCMP was the only law enforcement agency in Canada that prevented its members from unionizing.

The QMPMA has been at the epicentre of the RCMP’s union movement for more than 30 years. The association and its members are proud to have played a pivotal role over the years, supporting other associations and members who have been involved in seeking the Supreme Court of Canada’s landmark 2015 decision, allowing RCMP officers to unionize.